(circa 1919 - )
Doray Campbell was born circa 1919 in Alabama.1
Doray married Earl I. Slade, daughter of William Ira Slade and Neallie Dora Penton.1

(3 August 1926 - 30 October 1996)
Family Chart
Milan Slade was born on August 3, 1926 in Lamar County, Mississippi.1 He was the son of Ebenezer Slade and Dora Slade.1
Milan married Doris Merle Cameron2, the daughter of Daniel and Lucretia Cameron.2 Milan died on October 30, 1996 at age 70.1 He was buried in Dixie Baptist Church Cemetery, Forrest County, Mississippi

Terry Lynn Slade Terry Lynn Slade, 65, peacefully passed away on April 9, 2013 in Georgetown, Texas. Terry was born on March 15, 1948 in Austin, Texas to Raymond (Sr.) and Betty Slade. He graduated in 1966 from Lanier High School in Austin. He attended the University of Texas in Austin and worked for the Texas Commission on Environmental Quality from 1972 until retirement on October 31, 2000. Terry was a very giving person. He served as a Little League Coach: he made a difference in life through volunteer work. Music and collecting sports cards were his lifelong hobbies: he often shared music tapes and sports cards with others. He was happiest outdoors and hiked almost daily around Lady Bird Lake or Zilker Park. Terry played on several softball, volleyball, and basketball teams with friends--his many sports trophies provide testament to his athletic ability. Terry is preceded in death by his father, mother, their parents, and his brother- in-law Alton Young. He is survived by his brother Raymond Slade, Jr. and sister Vicki Young, along with nephew Nathan Hall and wife Mellani, niece Krista Hall, and 6 great nephews. The family is very grateful to the loving care that Terry received from the ladies at Meme's Personal Care Home in Georgetown. Friends are cordially invited to a visitation with the family at one o'clock in the evening, on Saturday, the 13th of April 2013, at Cook-Walden Funeral Home, 6100 North Lamar Boulevard, Austin, Texas. Funeral Services will immediately follow at two o'clock in the evening on Saturday, the 13th of April 2013, in the Colonial Chapel of Cook-Walden Funeral Home, 6100 North Lamar Boulevard, Austin, Texas. Contributions may be made to the Alzheimer's Association , 3429 Executive Center Dr., Austin, TX 78731. Published in Austin American-Statesman from April 12 to April 13, 2013.1

(circa 1918 - 1 December 1955)
Family Chart
James Marshall Slade was born circa 1918 in Louisiana.2 He was the son of James M. Slade and Maud Elizabeth McDonald.
James married Virginia Knox.3 James died on December 1, 19554 and was buried in Union Presbyterian Church Cemetery, Franklin Parish, Louisiana

(circa 1904 - )
Family Chart
Frances Louise Dunbar went by Louise.2 She was born circa 1904 in Georgia.2 She was the daughter of Benjamin H. Dunbar.3
Frances married John Rhodes Slade, son of William Bonner Slade and Mary Byrnes Brown, circa 1926.2 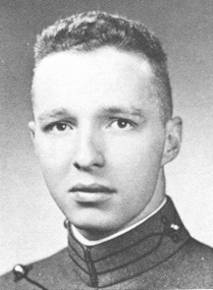 William Bonner Slade was born on September 16, 1927 in Lake City, Columbia County, Florida.1,3 He was the son of John Rhodes Slade and Frances Louise Dunbar.4,1
Bill was educated in the public schools of Florida, his native State, attending Columbia High School in Lake City, attaining honors. After preparation in Marion Military Institute, Marion, Alabama, where he distinguisbed himself in scholarship, he entered the United States Military Academy at West Point. Here he maintained the same high standing, graduating with the Class of 1950 as a Second Lieutenant of the US Air Force.
He was trained for jet flying in Sherman, Texas, and Phoenix, Arizona; graduated from the Gunnery School in Las Vegas, Nevada in October 1951; and was immediately ordered to Korea for combat flying. After two months combat training in the Philippines he was stationed at Suwon Air Base, Korea, in February 1952. His outfit contributed immeasurably to the disruption of enemy transportation facilities and installations. Lt. Slade was leading a four-plane mission; had released his bombs and was pulling up from the target, when his plane was hit and burst into flames. Moments afterward he crashed to the ground fifteen miles southwest of Huichon, North Korea, deep in enemy territory.3
William died on April 30, 1953 in Korea at age 25 [note: death date on his tombstone is May 12, 1952, differing from date furnished by the US Air Force report].2 He was buried in Linwood Historic Cemetery, Columbus, Muscogee County, Georgia

.2 Her obituary read as follows:

Graveside services for Virginia Knox Slade, 80, will be at 10 a.m. today (Wednesday) at Union Cemetery with the Rev. Jimmy Goodman officiating.

Services are under the direction of Community Memorial Funeral Home of Winnsboro.

Mrs. Slade died Monday, April 1, 2002 at North Monroe Medical Center after an extended illness. She was a past resident of Franklin Parish, a homemaker, and a member of First Baptist Church Archibald. She was preceded in death by her husband, James Marshall Slade and two sons, Donald C. Slade and Robert Marshall Slade.