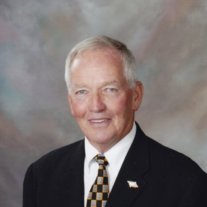 Daniel Patrick Slade was born on December 3, 1935 in Griffin, Spalding County, Georgia.2 He was the son of Ira Hunt Slade and Mary Dunlap.1
Daniel married Kathy James, daughter of Reverend Lewis James.3 Daniel died on November 6, 2013 in Griffin, Georgia, at age 77.2 His obituary read as follows:

Mr. Slade was born in Griffin, Georgia on December 3, 1935. He is preceded in death by his parents, Ira H. Slade, Sr. and Mary D. Slade; brothers, Dr. Ira (Dutch) Slade, David Slade and Dunlap Slade. Mr. Slade was a 1953 graduate of Griffin High School where he played football and basketball. He attended University of Georgia, was a former Georgia National Guardsman. Mr. Slade was a lifelong member of the First Baptist Church where he was a member of the Russell Raiders Sunday School Class. In 1958 Dan founded Slade Real Estate specializing in land and commercial Property for over 50 years. Mr. Slade was an avid runner and had won many marathons, a former member of the Griffin Exchange Club, Griffin Country Club, Elk’s Lodge, Heart of Georgia Board of Realtors and Georgia Bulldog Club. He was a loving husband, father and grandfather; loved cooking, gardening and spending time at the beach.

Visitation for Mr. Dan P. Slade will be on Thursday, November 7, 2013 from 6:00 pm until 9:00 pm at Conner-Westbury Funeral Home and on Friday, November 8, 2013 from 1:30 pm until 2:45 pm in the parlor of the First Baptist Church. A funeral service for Mr. Dan P. Slade will be conducted on Friday, November 8, 2013 at 3:00 pm in the sanctuary of the First Baptist Church. Dr. Randy Valimont, Dr. Bruce Morgan and Dr. Bill Hardee will officiate. A private family graveside service will be held at a later date. The family would like to ask the Russell Raider’s Sunday School Class to sit in a group at the service. Those desiring may make contribution to the First Baptist Church, P.O. Box 908, Griffin, GA. 30224.2

.2 His obituary read as follows:

Carlton Joseph Slade Jr., age 82 of Thomaston died Sunday March 9,2014 at Upson Regional Medical Center. Mr. Slade was born on April 16, 1931 in Milwaukee Wi, to the late Carlton Sr. and Beatrice Slade. He was formerly employed with Delta Airlines where he worked as a mechanic for 33 years. Mr. Slade was a member of Poston Road Baptist Church in Jonesboro Ga, where he served as a Deacon. He served his country in the U.S. Air Force. Mr. Slade was a member of Delta Pioneers, he was a volunteer fireman and a United Way Volunteer. He served on the Board of Directors for Shellnut Senior Citizen Center. Survivors include his sons Mr. David (Jamie) Banks of Thomaston Ga, Mr. Ross Slade of Tennessee Ridge Tn, Mr. Andrew (Julie) Slade of Anthem Az. 5 Grandchildren. 5 Great Grandchildren. Funeral Services will be held on Wednesday March 12,2014 at 11 :00 a.m. from the Chapel of Coggins Funeral Home. Burial will follow in Sherwood Memorial Gardens in Jonesboro Ga, at 2:00 p.m. The family will receive friends at Coggins Funeral Home on Tuesday March 11, 2014 from 6-8 p.m. In lieu of flowers donations maybe made to Thomaston First Baptist Church Television Ministry at 208 South Church St. Thomaston Ga. 30286. Coggins Funeral Home is in charge of arrangements
Published in The Atlanta Journal-Constitution on Mar. 12, 2014.2