(26 October 1876 - )
Family Chart
Anna Louise Slade was born on October 26, 1876 in Columbus, Muscogee County, Georgia.1 She was the daughter of James Jeremiah Slade and Leila Birchett Bonner.1
Anna married Dr. Theophilus West on June 17, 1902 in Saint Elmo, Columbus, Muscogee County, Georgia.2 Notice of the wedding in the Atlanta Constitution stated: Tuesday morning at 9 o'clock the marriage of Miss Annie Louise Slade and Dr. Theophilus West was solemnised at the home of Mr. and Mrs. J. J. Slade at St. Elmo. It was a very quiet but very beautiful home wedding. The handsome old colonial halls and rooms were most beautifully decorated with palms, ferns, and a lovely profusion of pond lilies which grow in great quantities in the lake. Dr. W. H. Smith, of the First Baptist Church, performed the ceremony. The prominence of the bride's family makes her marriage one of special and universal interest. Dr. West is a well known and prominent citizen of Marianna, Florida. Immediately after the ceremony they left for their home in Marianna.2

Children of Charles Blount Slade M.D. and Constance A Thill

Constance was widowed when her husband, George, died in January, 1978 in Exeter, Rockingham County, New Hampshire, at age 78 [last address of record].7 Constance died on January 10, 1992 at age 87.2

Miss Effie Mae Slade of Columbus and Mr. J. Lawrence Dozier of Talbotton, were quietly married at the home of the bride’s parents, Captain and Mrs. James J. Slade, in Columbus on Wednesday of last week. There were no attendants, the wedding being a quiet one. The ceremony was performed by Dr. W.F. Smith of the First Baptist Church of that city. There were present about seventy guests, mostly relatives of the couple, there being only a few intimate friends invited. A short reception was held after the ceremony and delightful refreshments were served the guests. At 2:45 o’clock Mr. and Mrs. Dozier left over the Central of Georgia for Alexandria, La., which place they will make their future home.
The bride is the lovely and accomplished daughter of Captain and Mrs. James Jerry Slade. She is very popular among her many friends who were much interested in her happy wedding. The groom is the son of Mr. and Mrs. J.L. Dozier of Talbotton and for several years he has been connected with a wholesale hardware firm of Kentucky, and in the future will travel the state of Louisiana, making his headquarters at Alexandria in that state. He has a great many friends in Talbotton who congratulate him upon his wedding and join the New Era in wishing for him a life of continued happiness.6
Effie died on June 28, 1971 at age 912 and was buried in Linwood Historic Cemetery, Columbus, Muscogee County, Georgia 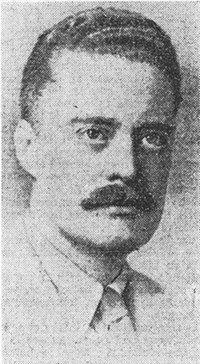 He received a Masters of Science degree in Mathematics from the University of North Carolina in 1930.

In 1931, he became associate professor of engineering mechanics at Rutgers, the State University of New Jersey, at the request of Dean P. H. Daggett, with whom he had worked at the University of North Carolina.5 The family home was in Middlebush, New Jersey.

In 1964 he took his family to San Miguel de Tucuman Argentina where he taught at the University. They lived there until 1969 at which time they relocated to Mexico and bought a Ranch very near Tacambaro Michoacan. When their son James developed a heart problem, they moved back to the United States to Redlands, California to be near them. They remained in Redlands until 1981, when they returned to North Carolina.6 James died on January 28, 1997 in Chapel Hill, Orange County, North Carolina, at age 96.2,7

(29 July 1869 - 29 January 1951)
Family Chart
James Jeremiah Slade Jr. was known as Santiago in Mexico.1 He was born on July 29, 1869 in Columbus, Muscogee County, Georgia.2,3 He was the son of James Jeremiah Slade and Leila Birchett Bonner.2
James married Consuelo Farias on June 19, 1899 in Uruapan del Progreso, Michoacan, Mexico.3 About 1900, Santiago secured a government contract to build a railroad between Zamora and Sitacuaro.1 James died on January 29, 1951 in Mexico at age 81.

(28 April 1831 - 30 April 1917)
Family Chart
James Jeremiah Slade was born on April 28, 1831 in Clinton, Jones County, Georgia.2,3,4 He was the son of Thomas Bog Slade and Anne Jaqueline Blount.5 In 1852, he graduated from the University of North Carolina at Chapel Hill with a Bachelor of Arts degree. He was a member of the Dialectic Society at the University.

Jerry married first Anne Gertrude Graham, daughter of John Graham, on July 19, 1855 in Covington, Newton County, Georgia.6 [WF] was widowed when his wife, Anne, died on May 9, 1856 at age 20 as a result of childbirth, leaving an infant daughter, Annie, who lived only a few months.3,7
James married second Leila Birchett Bonner, daughter of Seymore R. Bonner and Marion L Huguenin, on January 12, 1859.8 He was listed as having real estate valued at $6,000 and personal property valued at $11,200.

In July, 1863, at the request of Confederate officers in local command, The City Council instructed the Mayor to have all the citizens of Columbus capable of bearing arms to be enrolled for any emergency requiring local defence. In accordance with this call, there was a general enrollment in the city and county, and seven or eight companies met at the Court-house on the 18th of July, and formed a regiment. Officers elected included Jerry Slade.9 James Jeremiah Slade served in Captain Confederate Army - 2nd Georgia Regiment; Major with Army of Northern Virginia in 1864.1 In 1878, Captain and Mrs J. J. Slade purchased a large ante bellmum home in Columbus which they converted into a girls school and named it St. Elmo. It also served as their home until his death. He was listed in the 1880 census as a school teacher.

(11 January 1843 - circa September 1862)
Family Chart
John Henry Slade was born on January 11, 1843 in Columbus, Muscogee County, Georgia.1,2 He was the son of Thomas Bog Slade and Anne Jaqueline Blount.3 John enlisted in Co. G, 2nd Regiment of Georgia Volunteer Infantry on April 16, 1861 in Columbus, Georgia, at age 18.4 The GA 2nd fought with the Army of Northern Virginia in various engagements. Sep-Oct 1861 was the last muster for which J. H. Slade was present. A note in his service file states that J. Slade appears on List of Confederates wounded at Battle of Antietam that were taken prisoner and many later died in various hospitals. Antietam was the bloodiest single-day battle in American history, with about 23,000 casualties. We have found no recorded date nor exact place of his death, although he apparently died as a result of the wounds receved at Antietam.56,5 He was buried in Linwood Historic Cemetery, Columbus, Muscogee County, Georgia