(circa 1682 - 12 January 1746)
Family Chart
Arthur Slade was born circa 1682 in England.1 He was the son of Unknown Slade.1
Arthur married Elisabeth Hutchings on March 3, 1698 in Devon, England, at St Andrews, Plymouth.2 Arthur was the father of Sir Thomas Slade, English naval architect, who designed the HMS Victory, Admiral Nelson’s flagship at the Battle of Trafalgar in 1805. Arthur was a shipwright, working in the dockyard in Plymouth.1 Arthur died on January 12, 1746 in Portsmouth, England.1 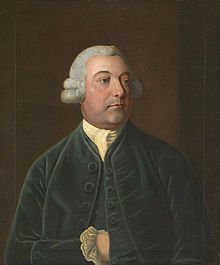 Sir Thomas Slade was born circa 1703 in England.2 He was the son of Arthur Slade and Elisabeth Hutchings.2,3
Thomas married Hannah Moore in 1747 in Nacton, Suffolk, England, in St Martin's Church.2 Slade was a shipbuilder and from a well-establish shipbuilding family based in Ipswich and Harwich. He probably began as an apprentice in the Deptford yard in 1718, where his uncle, Benjamin Slade, had just become foreman. He was sent to Harwich as naval overseer for the building of the ‘Harwich’, a fourth rate, in 1742. In 1744, Slade became assistant master shipwright at Woolwich. When his uncle died in 1750, Thomas replaced him at Plymouth, becoming a protégé of George Anson, a lord of the Admiralty. He then moved to Woolwich in 1752, Chatham a little more than a fortnight later and, finally, to Deptford in 1753, where he was ideally positioned to act as Anson’s unofficial adviser. In August 1755 he became joint surveyor of the Navy with William Bately; together they designed a number of ships, making improvements to the lines and training a new generation of shipwrights. Slade’s most famous ship was the 100-gun ‘Victory’, designed in 1758 and launched in 1765. He was knighted on January 27, 1768.4 Thomas died on February 23, 1771.5 He was buried in St. Clement Churchyard, Ipswich, Suffolk, England

Children of Benjamin Slade and Mary [?]