(13 September 1831 - 23 December 1904)
Family Chart
The Reverend George Fitzclarence Slade was born on September 13, 1831 in North Newton, Somerset, England.1 He was the son of Sir John Slade and Matilda Ellen Dawson.2,3
George married Eleanor Frances Warre on June 16, 1858 in Broomfield, Somerset, England, at The Church of St Mary & All Saints.3 He graduated from Oxford with M.A.4 George died on December 23, 1904 in Buckland, Surrey, England, at age 73 at The Rectory.5 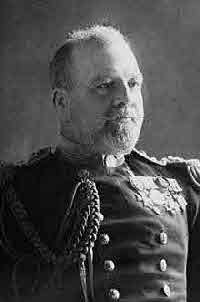 Admiral Sir Edmond John Warre Slade was born in 1859 in Alberbury, Shropshire, England.2 He was the son of The Reverend George Fitzclarence Slade and Eleanor Frances Warre.2,1 Admiral Sir Edmond John Warre Slade was christened on March 20, 1859 in Alberbury, Shropshire.2 He joined the Royal Navy and was appointed to HMS Northumberland as a midshipman in 1874. Promoted to Sub-Lieutenant in 1878, Lieutenant in 1879 and Commander in 1894, he commanded Cocktrice, a paddle gunboat stationed in the Danube to represent Great Britain on the Danube Commission in January 1895. In 1898 he commanded the sloop HMS Algerine in China. Promoted to Captain in December 1899, he commanded the cruiser HMS Diana in the Mediterranean from 1902. When the King visited Malta in 1903 Slade was appointed MVO. He was made Commander of the Royal Naval War College in 1904 and Director of Naval Intelligence in 1907. He was appointed KCIE in 1911[5] and in 1912 when the King and Queen visited India for the Durbar he was also appointed KCVO. In 1913 he was sent by Winston Churchill to investigate purchasing a 51% stake in the Anglo-Persian Oil Company. The expedition gave a positive report and the British Government bought a 51% stake in the Anglo-Persian Oil Company just before the outbreak of the First World War.3,4
Edmond married Florence Madelena Saunders on October 16, 1887 in Buckland, Surrey, England,5,6, the daughter of Flora Anne & James Parr Saunders.7 Edmond died on January 20, 1928 in Campden Hill, Middlesex, England, 63 Bedford Gardens.8 He was buried in Kensal Green Cemetery, Kensington & Chelsea, Middlesex, England

(10 September 1865 - 27 November 1941)
Family Chart
Marcus Warre Slade was born on September 10, 1865 in Langford Budville, Somerset, England.2,1 He was the son of The Reverend George Fitzclarence Slade and Eleanor Frances Warre.1 Marcus graduated from Oxford University in 1884.3
Marcus married Josephine Isabella Young on August 8, 1901 in Bradfield, Berkshire, England,4, the daughter of Rebecca Isabella & Henry Savill Young.5 They lived in London from 1816 to 1824, where Marcus was a Barrister.6 Marcus died on November 27, 1941 in Oxford, Oxfordshire, England, at age 76.7