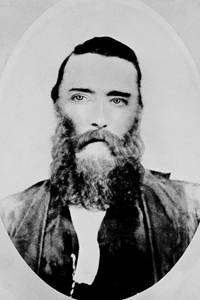 (25 June 1854 - 2 March 1895)
Family Chart
Hezikiah Polhill Slade was commonly known as Paul Hill Slade. He was born on June 25, 1854 in Randolph County, Georgia.2,1 He was the son of William Jethro Slade and Martha Ann Franklin Mitchell.1
Hezikiah married [?] Bastain circa 1876 in Morgan, Calhoun, Georgia, USA.3,4
Hezikiah married Isadora "Dora" Shute, daughter of Giles Shute and Mary Ann "Polly" [?], circa 1879.5 Hezikiah died on March 2, 1895 in Dawson, Terrell County, Georgia, at age 40 A notice in the Atlanta Constitution, datelined Dawson, March 2, 1895, read as follows:
Paul Hill Slade, while standing between his two brothers, was shot and instantly killed here today by Charley Allen. The whole affair was done so rapidly that despite the crowds on the streets and the nearness of Slade's two brothers, the shooting could not be prevented.
[The two brothers were later identified by this researcher as Deputy Sheriff John Henry Slade and Thomas Jefferson Slade]6 The March 6 edition of the Dawson News (GA) gave a more detailed story of this event. click PDF icon to read.7

A news article published in the Columbus Daily Enquirer on June 6, 1895 stated as follows: "Charles S. Allen who slew Paul Hill Slade on the streets of Dawson on the second day of March last, has been tried and convicted of murder and sentenced to the penitentiary for life."8 He was buried in Salem Baptist Church Cemetery, Edison, Calhoun County, Georgia