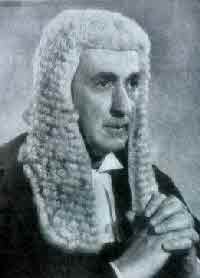 Humphrey Slade was born on May 4, 1905 in Kensington, London, England.1,2,3 He was the son of George Slade and Edith Mary Beale.3 Humphrey Slade emigrated on October 2, 1930 from Port of Southampton, England, to South Africa, aboard the "Watussi", bound for Durban.4 The ship's manifest indicated his previous address was 3 Hanover Terr, London, he was a solicitor, ultimate port was Mombasa. His intended future permanent residency was Kenya Colony.4
Humphrey married Constance Laing "Menina" Gordon on October 19, 1935 in Nairobi, Kenya.1 When the Second World War broke out in 1939, he was made Deputy Judge Advocate of the East African Forces, remaining in the position until 1941.5,2 In 1952, he was elected to the Legislative Council from the Aberdares constituency. He served as speaker of the Legislative Council from 1960 until Kenyan independence in 1963. He then served as speaker of the newly established House of Representatives between 1963 and 1967, and that latter year he was unanimously elected as the inaugural Speaker of the National Assembly of Kenya. He retired from public life in 1970.2 Humphrey died on August 10, 1983 in Nairobi at age 78.1

(23 July 1901 - )
Family Chart
Roger Phipson Slade was born on July 23, 1901 in London, England.1 He was the son of George Slade and Edith Mary Beale.1 Roger, a solicitor, was names as an Administrator in the estate of his grandmother, Annette Slade.2 Roger was widowed when his wife, Annette, died on October 8, 1936 in Bexhill-on-Sea, Sussex, England.2

(1924 - 16 May 2009)
Family Chart
Pauline Albinia Slade was born in 1924 in Holborn, London, England.1 She was the daughter of George Penkivil Slade and Mary Albinia Alice Carnegie.1
Pauline married David Henry Gustavus Hamilton-Russell on April 26, 1950 in Westminster, London, England.2 Pauline died on May 16, 20093 and was buried in St. Mary Churchyard, Clymping, Sussex, England