(10 September 1867 - 17 April 1921)
Family Chart
Charles Duncan Slade was known as Duncan. He was born on September 10, 1867 in Musquodoboit Harbour, Halifax Co., Nova Scotia, Canada.2,3,4 He was the son of Charles Alexander Slade and Mary Jane Crawford.1
Charles married Sarah Agnes Day on December 25, 1890 in Halifax County, Nova Scotia, Canada,5,6,7, the daughter of Eleanor Doyle & Soloman Day.8 Duncan is a lumberman who can read, write and speak both English and French.3 Charles was widowed when his wife, Sarah, died on September 17, 1911 at age 40.7
Charles married second Frances Elizabeth Myers on October 16, 1915 in Nova Scotia9, the daughter of Agnes Blakeney and John Myers. She was the widow of Elijah Blakeney.10 Charles died on April 17, 1921 at age 53 died of tuberculosis11,4 and was buried in Riverside Cemetery, Musquodoboit Harbor, Halifax Co., Nova Scotia, Canada

(14 February 1874 - )
Family Chart
Fredrick James Slade was born on February 14, 1874 in Jenkins Cove, Newfoundland.2 He was the son of George Slade and Mary Rogers.23
Fredrick married Mary Mutford circa 1901.1 Fredrick James Slade was a carpenter.1 He was a steel worker.4 The family is Methodist, all of them speak English but not French and all of them can read and write.5

(5 February 1884 - 7 May 1928)
Family Chart
Phillip Henry Slade was born on February 5, 1884 in Perrys Cove, Newfoundland, Canada.2,3 He was the son of William Slade and Catherine [?].4
Phillip married May Smith on October 29, 1907 in Sydney, Cape Breton County, Nova Scotia, Canada,4, the daughter of Rachel & James F Smith.4 The daughter of Rachel Nicholson & James Fraser Smith of Port Morien.4 Phillip Henry Slade was a miner.5 He enlisted in the Canadian Overseas Expeditionary Force (CEF) as a Sergeant on September 15, 1915 in Carbonear, Newfoundland.3 At the time of his enlistment in the military, Philip stood 5' 6.5"tall, weighed 200 lbs, had blue eyes and brown hair. He had tatoos on his right arm of a compass and clasping hands with a heart. On his left arm, his tatoos were of a skull & cross bones, a cross, and the words "Philip Slade born 1884". He attended the Wesleyan Church.3 At the time of his son Philip's birth, Philip Henry was in France fighting in World War I.5
Phillip married Evelyn Clara Strickland [?], daughter of John Strickland and Lydia [?]. The family is Presbyterian and all of them can read and write English. Mary has Canadian citizenship but the remainder of the family have citizenship in Newfoundland.6 Phillip died on May 7, 1928 at age 44 [burial date May 11, 1928]7,8 and was buried in Burnaby Heritage Cemetery, Burnaby, British Columbia, Canada

Children of Phillip Henry Slade and May Smith

Children of May Smith and Phillip Henry Slade 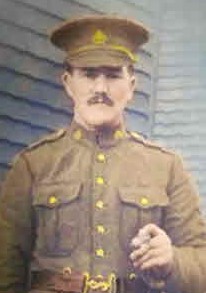 William Slade was born on October 25, 1881 in Salmon Cove, Newfoundland.1,2 He was the son of William Slade and Catherine [?].3
William married Alexis "Lexi" McDonald circa 1908.1 William Slade was overman in coal mine.4 He served in joined the Canadian Expeditionary Force
on November 18, 1915.5 He was in the Army. Unit: Canadian Engineers Division: 1st Tunnelling Co.
His Attestation Paper states he was 5'8" with light completion, blue eyes and brown hair. There was a smal blue scar on this left hand.6 He was a Methodist.6 William died on July 23, 1917 in Belgium at age 35.2 He was buried in La Clytte Military Cemetery, Belgium