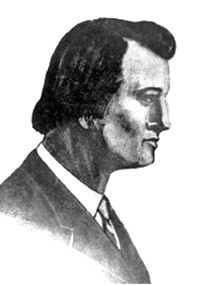 Joseph Alfred Slade was commonly known as Jack or 'Alf.' He was born on January 22, 1830 in Carlyle, Clinton County, Illinois.2 He was the son of Charles Slade Jr. and Mary Darke Kain. During the Mexican War he served in the U.S. Army that occupied Santa Fe, 1847-48.3
Joseph married Virginia Marie Dale circa 1856.2 By 1859, the extraordinary Slade had become superintendent of the toughest portion of the Overland Stage route between Julesburg, Colorado and Fort Bridger, Wyoming. He established the route, hired the men, and directed the operations of the stage line. While division superintendent, he shot and killed Andrew Ferrin, one of his subordinates who was hindering the progress of a freight train, in May 1859. At the time, shooting deaths of this kind in the West were rare and Jack Slade's reputation as a "gunfighter" spread rapidly across the country. In March 1860 Slade was ambushed and left for dead by Jules Beni, the corrupt station keeper at Julesburg, Colorado, whom Slade had removed. Slade remarkably survived, and in August 1861 Beni was killed by Slade's men after ignoring Slade's warning to stay out of his territory.

Slade's exploits spawned numerous legends, many of them false. His image (especially via Mark Twain in Roughing It) as the vicious killer of up to 26 victims was greatly exaggerated: Only one killing by Slade (that of Andrew Ferrin, above ) is undisputed. But his ferocious reputation, combined with a drinking problem, caused his downfall: He was fired by the Central Overland for drunkenness in November 1862. During a drunken spree in Virginia City, Montana, he was lynched by local vigilantes for disturbing the peace.3 Joseph died on May 10, 1864 in Virginia City, Madison County, Montana, at age 34 hung by vigilantes.1 Link to more info about Jack Slade:
http://www.deathofagunfighter.com.3

(September 1854 - )
Family Chart
Susanna V. Burgess was born in September, 1854 in Surry County, Virginia.1,2 She was the daughter of John C. Burgess and Rebecca Bryant.3,2

Susanna married Joseph Thomas Slade, son of John N. Slade and Elizabeth Holloway, on December 8, 1870 in Virginia.4 1910 census indicates she was mother of 7, only 4 living.5

(November 1881 - )
Family Chart
Cora Anna Slade was known as Anna C. Slade.2 She was born in November, 1881 in Virginia.1 She was the daughter of Joseph Thomas Slade and Susanna V. Burgess.1
Cora married first Alexander Thomas Sumerlin on March 27, 1902 in Claremont, Surry County, Virginia.3
Cora married second [?] Schroeder.2 He was the son of Henry and Margaret Sumerlin.4,5 Anna married a Schroeder sometime before 1920 and he apparently died as she is shown as widow using that surname in the 1920 & 1930 census.2

(June 1873 - 1943)
Family Chart
John William Slade was born in June, 1873 in Virginia.3,4 He was the son of Joseph Thomas Slade and Susanna V. Burgess.5 He was listed as Joseph S, age 3, in 1880 census.
John married Nancy Belle Gwaltney on January 18, 1894 in Surry County, Virginia.6,7 He is listed as Joseph W. in 1920 census.
John married second Vera Tillage.8 John died in 1943.9 He was buried in Gloucester Point Cemetery, Gloucester, Gloucester County, Virginia

Child of Caleb Slade and Hannah [?]

Children of Edward Slade and Eliphel [?]

Children of Edward Slade and Elizabeth [?]

Child of Sherman Slade and Betsey [?]