(April 1886 - )
Family Chart
Guy Slade was born in April, 1886 in Illinois.1 He was the son of John W. Slade and Katherine McCaleb.1 Guy Slade was registered for the military draft in World War I on September 12, 1918 in Pinckneyville, Perry County, Illinois, lost one arm and one leg.2

(August 1893 - )
Family Chart
Gertie Slade was born in August, 1893 in Illinois.1 She was the daughter of John W. Slade and Katherine McCaleb.1
Gertie married Lacy Taylor, son of Willard Taylor and Matilda Indiman, circa 1907.2

(circa 1877 - )
Family Chart
Sidney Sherman Slade was born circa 1877 in Reynolds County, Missouri.1 He was the son of John Wesley Slade and Martha Elizabeth Adkins.1 Sidney died while still a young boy. 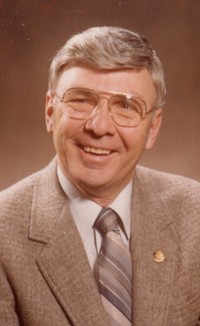 James Lee Slade was born on January 30, 1928 in Oklahoma City, Oklahoma County, Oklahoma.1 He was the son of Lee Dumas Slade and Jessie Hollis.
James married Genevieve, daughter of Yeulin VanSickles Willett and Ruth Elizabeth Fink, on January 27, 1951 in Perry, Noble County, Oklahoma, in the bride's family home.2 They were married in the brides home 903 Ivanhoe St., Perry, Oklahoma. James Lee Slade was a 1951 graduate of the University of Oklahoma with a BS in Civil Engineering. He attained the rank of Major in the Corps of Engineers, US Army Reserves. He is a Registered Professional Engineer and holds Land Surveyor License number 4 in the State of Oklahoma. He retired from active practice of engineering in 1994. James died on July 26, 2021 in the home of his daughter, Jamie, The Village, Oklahoma, OK, USA, at age 93.3 His obituary read as follows:

James Lee (Jim) Slade, PE
January 30, 1928 – July 26, 2021
James Lee (Jim) Slade, 93, loving husband, caring father, doting grandfather and great-grandfather, proud engineer, and accomplished genealogist, expired on July 26, 2021 at his daughter Jamie Slade’s home in The Village, OK.
He was born (as Jimmie Lee Slade) in Oklahoma City on January 30, 1928 to Jessie Hollis Slade, who was born in Cloud Chief, Indian Territory and Lee Dumas Slade of Boyd, Wise Co, TX, who died when Jim was a young adult. Dad lived his entire life as a proud, friendly, helpful Oklahoman.
After graduating from Classen High School, he courted his wife, Genevieve Willett Slade of Perry, OK at The University of Oklahoma; they married in 1951. They enjoyed a lifelong love affair and were inseparable until her death in 2014. He is survived by daughters Rebecca Ruth Slade Teague, Edmond, and Jamie Marilyn Slade, The Village, OK, son Lee Willett Slade, Boxborough, MA; three grandchildren, Susanne Slade Kelly (Bradford), Conroe, TX, Lauren Leigh Teague Collins (Tony), Tulsa, OK, and James Lee Slade (Alicia), Prosper, TX; and two great-granddaughters, Emery Kay Slade and Laurel Grace Slade, both of Prosper, and a third great granddaughter, Baby Girl Collins, whose arrival is imminent. He adored them all and was loved much by each.
Educated and trained as a civil engineer, he served as City Engineer of Ponca City, OK for five years before accepting a position as Bond Engineer and Assistant City Engineer with the City of Oklahoma City. In addition to being a licensed professional engineer, he was also Oklahoma Registered Public Land Surveyor #4, with experience designing and surveying throughout the state, including Turner Turnpike, Lake Eufaula, and major interchanges statewide. Early in his career he surveyed from the state’s Initial Point, a stone marker that established the first survey point in Oklahoma Territory. He established the consulting civil engineering firm Slade & Associates before merging with Hudgins Thompson Ball (HTB), a firm since acquired by Dewberry. Always a proud member and contributor to the engineering profession, he was honored as a Life Member of the American Society of Civil Engineers and a Fellow of the Society of American Military Engineers.
He relished travel, boating, and otherwise enjoying family times at state lakes, especially Lake Eufaula. He was an accomplished water skier into his 60’s and boasted an almost perfect record in teaching dozens of newbies how to water ski. His planning and giving spirit made him an expert at creating memories for his family and their friends during long weekends on smooth water and sunset barbecues on the deck.
Jim Slade was a lifelong learner and teacher who advanced the use of computers in genealogical research. He was ever eager to help others trace their roots, regardless of their family name. He was the global keeper of the Slade family name through the Guild of One-Name Studies, London, England, and wrote the definitive book, The Descendants of Samuel Slade of Southampton Virginia, tracing his family lineage to the mid-1600’s. He enthusiastically worked to identify and connect the extended Slade family worldwide, even during his last days.
Dad began seriously researching family history in 1975, painstakingly harvesting handwritten and microfiche records from numerous county courthouses before the advent of computers and electronic databases. As computers became widely available in the late 1980’s, he helped pioneer their use as a tool for genealogical research, applying the lessons he had learned with land records and emerging technology in his engineering practice. He helped found and lead the Genealogical Group of the Computer Club of Oklahoma City. He served numerous years on the GENTECH Advisory Council and Oklahoma Genealogical Society Board and as National Chairman of the Computer Interest Group of the National Genealogical Society. He eventually was elected to the board of directors of the National Genealogical Society. He lectured frequently at national and regional genealogy conferences and built a ‘second career’ as a lecturer aboard the Royal Caribbean and Cunard Cruise Lines, helping educate and entertain passengers and crew on passages of the Royale Crowne Dynasty and the Queen Elizabeth II cruise ships, among others.

Dad was driven to make life better for his loved ones. He was never without a list of to-dos, or a plan for today, tomorrow, and next week. After Mom’s passing in 2014 left him without a life partner, he built a new circle of friends at his independent living facility, The Statesman. He served several years as council president, and enthusiastically participated in numerous activities, including excursions, swimming, bridge, and parties, winning the annual Halloween costume competition multiple times.
He cheered his beloved Sooners teams in all sports, especially women’s softball. He advised and assisted with his daughters’ backyard landscaping and loved flowers of every kind and color.
Dad was a 62-year member of First Presbyterian Church in Oklahoma City, serving as deacon, elder, and trustee, including trustee chair for multiple terms. He was a gentle, loving person who lived a quiet but powerful faith. He cared deeply for his family, his friends, his profession, and genealogical research. Dad faced his deteriorating health with positivity, wit, and grace, even as he knew his days were growing few. Our family thanks all those who cared for him, especially his many caregivers at Baptist Integris and Frontier Hospice, as he dealt with a progression of health challenges with brave dignity.
We miss him terribly, but always with smiles about his many stories, drawn from his incredibly sharp memory and attention to detail. Friends are invited to join the family in celebrating his life at 1 PM on Monday, August 2 at First Presbyterian Church of Oklahoma City, following a private interment ceremony at Memorial Park Cemetery. The family suggests that remembrances be made in the form of a donation to the Endowment Fund of the First Presbyterian Church of Oklahoma City, 1001 NW 25th Street, Oklahoma City, OK or to the Oklahoma Genealogical Society, P.O. Box 12986, Oklahoma City, OK 73157-2986.3

(June 1852 - )
Family Chart
Elizabeth P. Crosson was born in June, 1852 in South Carolina Her parents were also born in South Carolina.1 She was the daughter of James M. Crosson and Helen M. [?]2,3
Elizabeth married Charles Slade, son of William Otis Slade and Ann Matilda Ewell, circa 1887.1

(circa 1853 - )
Family Chart
Albert N. Slade was born circa 1853 in Richmond, Virginia.1 He was the son of Bartholomew Slade and Sally W. Murphy.1 No further information is known about this child.

(1904 - )
Family Chart
Annie M. Slade was born in 1904 in Surry County, Virginia.1 She was the daughter of John William Slade and Nancy Belle Gwaltney.1

(3 August 1907 - 7 June 1972)
Family Chart
2 Robert Thomas Slade was born on August 3, 1907 in Surry County, Virginia.3,4 He was the son of John William Slade and Nancy Belle Gwaltney.3 He was recorded in 1910 census as Robert Allen Slade, however, all other records give his middle name as Thomas, or T.5
Robert married Marjorie Della Noon circa 1922.6 Robert died on June 7, 1972 at age 641 and was buried in Waverly Cemetery, Sussex County, Virginia